Couldn’t help using Neawendi again for this one. That lady can not sit still with enemies around. I on the other hand feel rather lazy and might have skipped some pieces in here.. :F

“Hey Aiu!” Neawendi whispered loudly as she slid down the side of the ravine. “They’re here!” She pounced on her fellow guardian and tugged at his sleeve. “Let’s go!”

“Wait!” Aiu grabbed her by the shoulders and pushed her against the ravine wall to stop her from running off. “How many?”

“Maybe!?” Aiu snorted and lifted a slender eyebrow questioning. “We will need something more specific then that.” He released her from his grip and stepped back. Neawendi shrugged and adjusted her robes where they had been skewed.

“I didn’t count. But we can take them I’m sure!” She gripped her sword and unsheathed it a few inches. Aiu was on her again and grabbed her arm before she could get her blade out.

“No, no. I’m not running blindly into battle. And neither are you.” He nodded to their warriors that sat waiting for orders. “Don’t not throw their lives away by being reckless.”

“Shh! No.” He pointed up to the forest above them. “Show me. But do not engage.”

“Fine.” She rolled her eyes and relaxed briefly.

The Morgëthri squad huddled in the distance, swords drawn and a few mounted on horses. Aiu shot Neawendi a stern glare.

“Cavalry, really? That is quite a big detail to omit.”

“I’ll take them. You get the rest.” She replied. “Sneak around and flank them, I’ll charge from here.” She already had it all planned out in her head. And in her mind she had already won the battle and gone home.

“They will. I’ll make them.” She giggled slightly manically. “Besides, the man with the red scarf will recognise me. If nothing else he’ll send them my way.”

Aiu rubbed his temples with one hand and frowned until his his brow ached.

“That is so stupid…” He paused and watched their enemy patiently thinking of a better plan. Neawendi practically bounced on her spot eager to get going. Like a war dog only held back on a leash.

And here is a little bonus sketch of Maeflin from yesterdays post. : 3 (if the image doesn’t show, try refreshing the page.) 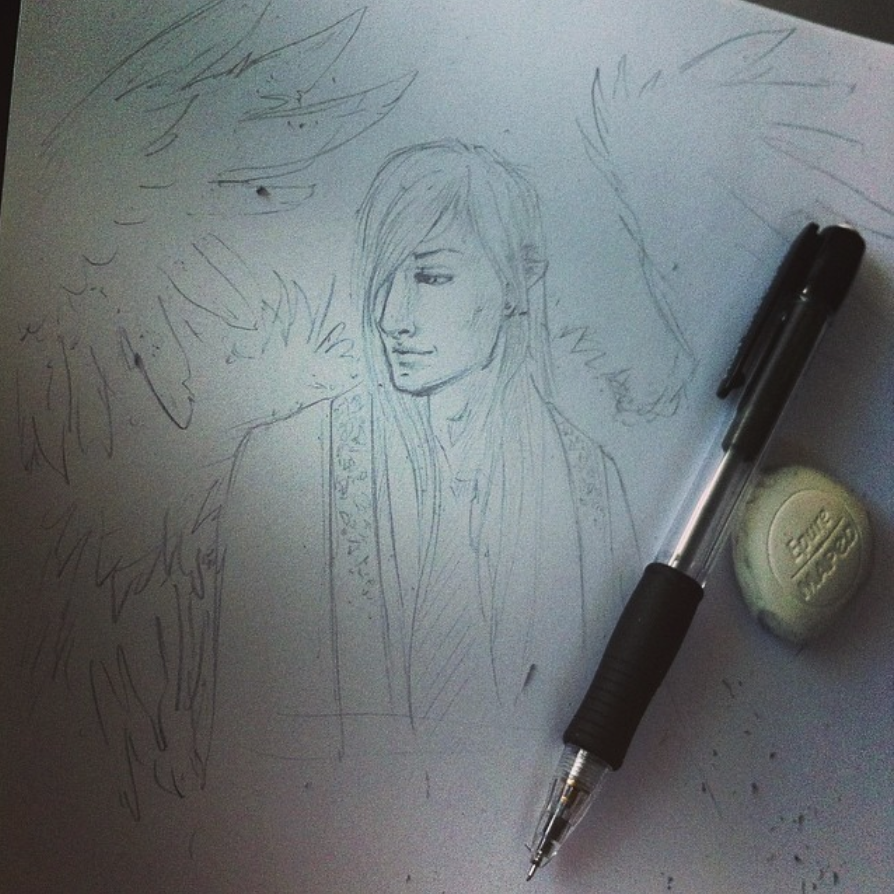