Alariss is becoming one of my personal favourites, his name is fucking beautiful and his is such a nice guy… who abducts people and condemn them to eternal torture! :’3 Cairaha is alright too… >.>

Alariss wiped the thick red blood from his curved dagger. Its beautiful moon steel edge sharp as ever. He looked down on the body at his feet and prodded it with his boot. Nothing. His foe was dead, at least for now.

He flipped the body over on its back and grimaced at the severe mutilation of the mans face. His cheeks were cut up from the corners of his mouth to the base of his ears in a gruesome jagged smile.

They had fought fiercely, but Alariss had survived with only a few stinging scratches. He wondered what this one was, such off features. But he would find out. He kissed the blade of his dagger and pressed it against the body’s skin.

“Give me your soul, oh dead one. Give me the power of your blood.” Alariss carved his rune into the chest of his victim and dabbed his fingertips in the still hot blood that seeped from it. He wanted to drink it, but before his fingers could reach his mouth the body sprung back to life. It grabbed his arm and sank its sharp teeth into the tendons of his wrist.

Alariss let out a howl and pulled away. He dropped his dagger in order to grab on to his wound. Something had been severed, but if it was his artery or the tendons he wasn’t sure. The pain spread through his entire arm, throbbing, aching. He let out a moan, overwhelmed by the sensation.

“Reaper.” The Dead One hissed “I give you my life. I bleed for you. But my power is my own.” Two bright yellow eyes with oval pupils stared intently at Alariss. “Is that not enough?” His voice was soft but the tone was very threatening.

“I am sorry.” Alariss replied. “But I followed our rules, and now you have taken mine unfairly. I believe you owe me for that.” He clenched his teeth and tried to block out the pain. It didn’t work much, he could keep his focus but but it made him no less aware that his brachioradial muscle was about to snap.

The Dead One watched him patiently, tilting his head slightly from one side to another. He watched the blood drip from the Dwath’ai’s wound pondering something very carefully. “Hmm.” He mumbled and licked his lips. “Give me more, and I’ll give you some of mine.”

Alariss didn’t like the glow in the Dead Ones eyes. “I am not like you, I can not bleed forever.” The muscle contracted and Alariss screamed. Nausea swept over him but still he refused himself to loose his mind over it.

He loosened his belt and tightened it again around his arm to slow the bleed. He felt cornered now when his good arm was rendered useless and looked at his dagger where it lay on the floor, wondering if he would need it.

“You wish to fight me again?” The Dead One crawled closer rising up on his knees and hands.

Alariss shook his head and backed half a step. “Only if I must.” He dearly wished he had brought his sword. He could have ended this with one clean cut. Perhaps this beast would have stayed down a bit longer without its head. 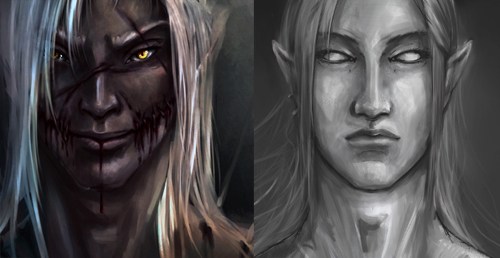