“The situation got a bit out of hand…” 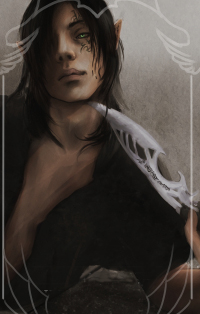 Jillian is an experienced elven assassin with no moral issues about his work. Kill, be happy, and enjoy life, that's what he does best. His name is almost entirely a pseudonym and he often gives different names depending on who is asking for it. He gave himself the surname Issayë, as was customary for those born with the spirit of the same name attached to them.

Jillian was born in Akariën to a laerthri druidess and a nevaari general. His mother died a brutal death under mysterious circumstances when he was still a child and his father took off without much of an explanation, leaving Jillian and his many siblings to fend for themselves.

His two oldest brothers, merely adults at the time thought it would be best to travel to the colonies in Eregiën to start a civilized life. Being a bit of a wild child, Jillian got lost in the city chasing his puppy through the alleys and his family was forced to board the ship without him.

Lost and out of his element, he was easily “recruited” to a guild of assassins where he went through various and often deadly challenges to become an official member. His stellar performance unsettled many in the guild and he was believed to not be “quite right in the head.” Of course, no one was expected to come out of the challenges mentally unscathed, but that was also the problem. Jillian had a tendency to shrug off harrowing experiences much too easy. He justified it as really enjoying a challenge and a desire to learn, the suffering endured made sense when only the strongest and most cunning of his class were meant to survive.

As a young adult, Jillian moved away from the guild and bought a home in Alberdon where he would stay when not actively looking for assassination contracts. It was there he befriended a pack of Akarian dire wolves and became mortally wounded when trying to protect a female from an outside male. The mauling caused him to almost bleed out before he could get proper help and the severity of the injuries should have lead to his death. He spent days on the verge of consciousness in a healer’s home and miraculously recovered—slowly—but to full health.

The protruding scars across his chest and chipped ribs remained as a permanent reminder of the first time he almost died. It was also the first time he realized something was indeed not quite right about him and that he could possibly be developing some kind of psychosis.

It wasn’t until he raked up a small kill count that he was made aware that his mind was perfectly healthy, but that a notorious spirit was lodged in his own body with great plans for his future. Jillian however, had no desire to be a part of the destiny set out for him and set out to do everything he could to defy the spirit. This led to a long miserable period where neither of them got what they wanted. In the end, a compromise was reached where Jillian would occasionally butcher and bleed his victims to feed the spirit and he would in return enjoy practically being immortal.