“I like times of peace, everyone gets so stressed when their lives are on the line.” 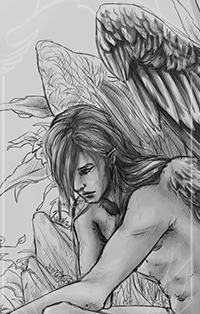 Maeflin, also known as the golden winged elf, is an odd sight in the court of the High Lord. His golden eyes and wings fill observers with awe and sometimes an ounce of fear. Clearly, he is not really an elf but his bubbly and warm personality swayed the elves of Tharglond to the point where they no longer care about his origins.

Maeflin appeared outside the gates of Old Tharglond, exhausted, wings broken and rugged. He whimpered in agony, complaining that he felt as if his body was being crushed and was on fire. The Silvrian elves had no idea what to do with him. They had never seen anything like him and first mistook him for a god. He was taken to the citadel and placed in a cold pool to cool down.

Maeflin recovered physically but had no memory of his previous life, neither does he desire to. No pleasant past would have left him in the condition he was found so it could just as well stay gone.

The elves quickly took a liking to him and allowed him to stay in the city for as long as he wanted to. His ability to bring comfort and reassurance to those who needed it, being a good listener and a wise voice of reason made him valuable to the court during rough times.

When the Great War engulfed the lands of the free elves Maeflin suddenly found himself appointed the High Lord’s advisor. He already had a close relationship with Lorioloth but he still reluctantly accepted the promotion.