Haran’utarië or simply “Haran” is the name given to the physical plane of this world by its elven inhabitants. Little of Haran has been explored and such ventures are commonly discouraged. High Lord Lorioloth, who lost a great number of his people to exploration strictly enforces laws on what areas his people can travel. Past expedition to foreign lands and even locally has brought bitter rewards and few benefits.

There is no detailed recording of any creation myth among the Free Elves. It is known that there were many gods involved in the creation of the world, but that the only one that matters is Ithraën – The God of Light. By him, the elven kings were told that they were the firstborn and this world had been created for them to live in. As the elves explored the world there has been disturbing evidence that what they were told by their creator was not entirely true.

Ancient ruins and spirits of an unknown people have been found all over Haran showing that there is much more to history then they were told.

Haran has three moons, Istai, Ruah, and Savah. Originally there was only one, the other two appeared later in history by prophesied events. They orbit the sky of Haran in undefined paths and vary in size and intensity, Istai always being the biggest and brightest.

Days and nights last for somewhat irregular durations and there is no official tracking of time or seasons. The elves watch the position of the sun and the hue of the sky for a general idea of morning, mid-day, and evening.

At night the heavens shimmer with stars and provide the most reliable means of navigation on land and sea.

The regions of Lamóne’ya’sarantyë are frigid and mainly frozen plains. Avaldion, Akariën, and Eregiën are generally tropical. Lomerthin is temperate and Jeerwithuën has quite a wide variation in climates across the continent, the upper parts ranging from tropical and temperate and the lower half more continental fluctuating between warm and cold temperatures.

Haran is theoretically a flat world though its “borders” are not solid walls. Reaching the edge usually ends up with the observer ending up on the opposite side of the world or simply find themselves turned around or passed out to wake up nearby where they came from. The elves have so far discovered two borders, one seemingly going across the middle of Lamóne’ya’sarantyë and another somewhere in the ocean above Akariën and Lomerthin. This separation puts Avaldion outside of Haran and it is commonly considered its own realm but travel between the two is fairly consistent and it is clear Avaldion was at some point a part of Haran as they share the same races and many archeological remains.

The many continents are separated by a massive body of fresh water often referred to as the Sea of Sorrow. 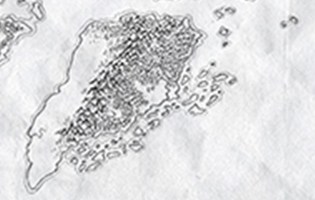 The new home of the laerthri and losserim. It has vast tropical forests covering most of the land areas, towering mountains, rugged tall coastlines, sprawling grasslands and a cold wasteland west of the Ae Chaëtharas mountain chain. A lethal archipelago of islands and cliffs protect the continent to the east discouraging anyone not familiar with it from sailing through it. 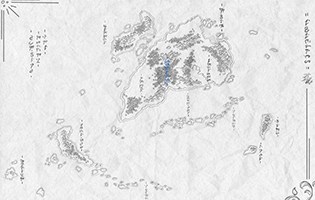 Avaldion has a great diversity of biomes ranging from forests, mountains, deserts, and grassland. The mountain areas are cold and often covered in deep snow. The coasts are mostly barren as hard winds tear away most vegetation. How the first elves came to Avaldion is unknown and it is constantly contested between the settlers. 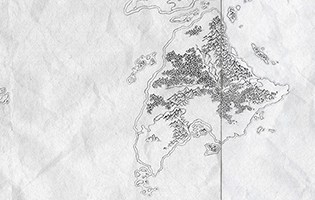 With its tropical forests, many beautiful mountains and a lot of grasslands, Eregiën is considered one of the best places to live. This huge landmass could easily have replaced Jeerwithuën as a new home for all the Free Elves but the distance they would have to travel made it less appealing. It was later claimed by Laerthri explorers who welcome any other race to share it with them. This home-to-all was wildly explored until it was discovered that it was not as uninhabited as they had though. Elves and humans since then stick to the lower half of the land leaving their anhari neighbors in peace.

Despite being the birthplace of elves and later, humans, most of Jeerwithuën is surprisingly hostile to life. The northern parts originally belonging to the Free Elves has hilly grasslands, many rivers and lakes, several forests and temperate mountain chains.The mid part commonly known as the Ashlands consists of an infertile expanse of rocky ground and shallow soil. Ash covers the ground and the forests are dry with black vegetation that poisons and corrupts any life form that consumes it. This harsh environment is the birth home of the nevaari and refuge to the morgëthri before the Great War.The lower part of Jeerwithuën is almost entirely covered with dark and thick forests split by wide rivers. The mountains are snow-covered and cold winds make them almost impossible to approach. This region is home to savage predators and demonic beings but also the birthplace of humans. How they managed to survive and develop something resembling a society is baffling though they did have some help from the morgëthri.

The biggest continent in the known world and once inhabitable, Lamóne’ya’sarantyë became frigid and ice-capped after the elf Fëarandir touched a long lost Heartstone rumored to be the heart of the world. The mountains turned black as the cataclysm settled and life never recovered. A few small groups of elves set up permanent settlements on a part of the eastern shore, some out of guilt and wanting to one day restore the land and others simply loving the harsh, unusual climate.

The silvrian fled to Lomerthin after the Great War, not wanting to stray too far from their homeland but enough of a distance to discourage the morgëthri from pursuing them. It has a mostly temperate climate and on rare occasions, the air from the mountains cool the land below and causes snowfall over the fields.